What is dialogue? It is conversation between characters in a story and is very important to add interest to the piece and to move the plot forward.  There are some rules to dialogue, however, that you want to make sure you know. 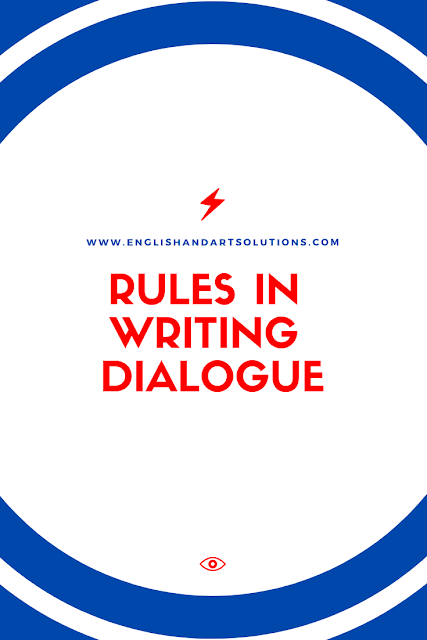 RULE #1: A direct quotation begins with a capital letter.

Jimmy shouted, “See you at the game!”
“Is it true?" asked Cindy.
RULE #2: When a quotation is interrupted into two parts with words like “he asked” or “the teacher      demanded,” the second part begins with a lower case letter.

“What are some of the things,” Mrs. Baskin inquired, “that make school so much fun?”
“One thing I like,” replied Sarah, “is recess!”

“Let's visit the museum,” suggested Samantha.
Jon replied, “Didn't we go there last weekend?”
“But when we did,” Beth added, “we didn't see the Ancient Egyptian exhibit.”

RULE #4: Do not put a period at the end of a quotation followed by things like she said, mom asked, he    explained, etc. Use commas, question marks, and exclamation marks but not periods. Periods         end sentences.

RULE #5: Make a new paragraph (indent) when a different person begins to speak.

"Last night, I dreamt that I ate a giant marshmallow," Kevin said.
"Was that anything like the dream you had about eating your way through a mountain of                      fruit cocktail?" asked Suzy.
"Scarier," Kevin explained. "This time I woke up and my pillow was gone."

-Always make it clear who is speaking in the dialogue.
-Try to avoid using the word “said” repeatedly.

Rewrite the conversation. Remember to start each person’s dialogue on a new line.
I love to go to the movies Cameron said but there is nothing good showing at all I know Marcie replied it is crazy how many crappy romantic comedies they churn out tell me about it Cameron exclaimed if I see one more stupid Kate Hudson/Matthew McConaughey puke-fest I will personally poke my eye out with an icepick and perform my own lobotomy I think that may be a little bit outrageous Marcie pointed out but I can get behind the sentiment my big beef, though, is the terrible horror movies lately what happened to scaring us rather than grossing us out would you rather go out to dinner tonight Cameron asked sounds like a plan Marcie agreed they left to go to the corner deli, walking arm in arm.