ALLUSION- an expression designed to call something to mind without mentioning it explicitly; an indirect or passing reference. 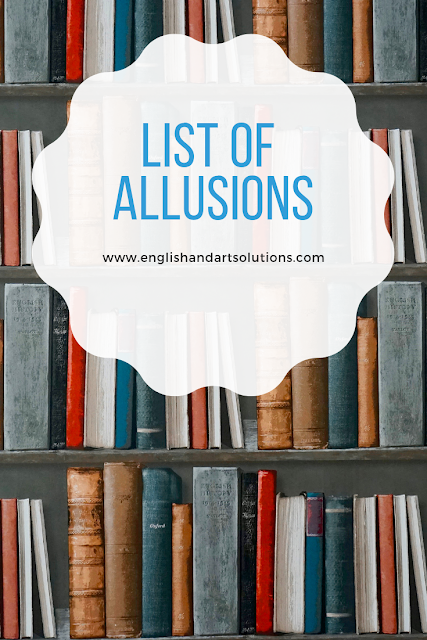 1. Achilles’ Heel: Achilles was a figure in Greek mythology who was a hero of the Trojan War and was featured in Homer’s Iliad. He was said to be invulnerable except for at his heel. Thus, when Paris shot Achilles in his heel the wound proved mortal. The term “Achilles’ heel” now refers to a strong person’s one point of weakness.

3. Big Brother: Now a reality television show in countries across the world, the term Big Brother comes from George Orwell’s dystopian novel 1984 (he, in turn, may have taken the phrase from a WWII-era billboard). Whereas it once just described a familial relation, “Big Brother” is now shorthand for referring to mass surveillance and abuse of government power.

4. “When she lost her job, she acted like a Scrooge, and refused to buy anything that wasn’t necessary.” Scrooge was an extremely stingy character from Charles Dickens’ A Christmas Carol.

5. “I thought the software would be useful, but it was a Trojan Horse.” This refers to the tale in Homer's Iliad where the Greeks built a large, hollow wooden horse to hide soldiers in. It was given as a gift to the enemy during the Trojan War and, once inside the enemy's walls, the soldiers broke out. By using trickery, the Greeks won the war.

6. “He was a real Romeo with the ladies.” Romeo, the lead character in Shakespeare’s play, Romeo and Juliet, is considered to be a true romantic hero, and won over Juliet against her family's wishes.

7. “He was a Good Samaritan yesterday when he helped the lady start her car.” This refers to the story of the Good Samaritan who was the only one to stop and help a man in need.

8. “She turned the other cheek after she was cheated out of a promotion.” This comes from the Sermon on the Mount, where Jesus teaches that you should forgive someone who has wronged you and not seek revenge.

10. “You are a Solomon when it comes to making decisions.” This refers to the story of King Solomon, who was given great wisdom by God.

11. “When the volcano erupted, the nearby forest was swallowed up in dust and ash like Jonah.” In the Bible, Jonah was swallowed whole by a whale.

12. “It is raining so hard, I hope it doesn’t rain for 40 days and 40 nights.” This refers to the story of Noah and the ark he built when he was told by God that it would rain for 40 days and 40 nights and flood the land.
13. “I was surprised his nose was not growing like Pinocchio’s.” This refers to the story of Pinocchio, where his nose grew whenever he told a lie. It is from The Adventures of Pinocchio, written by Carlo Collodi.
Posted by Nina Nichols on July 12, 2018