The Art of Persuasion
Ethos, Pathos, and Logos are modes of persuasion used to convince audiences. They are also referred to as the three artistic proofs (Aristotle coined the terms), and are all represented by Greek words. 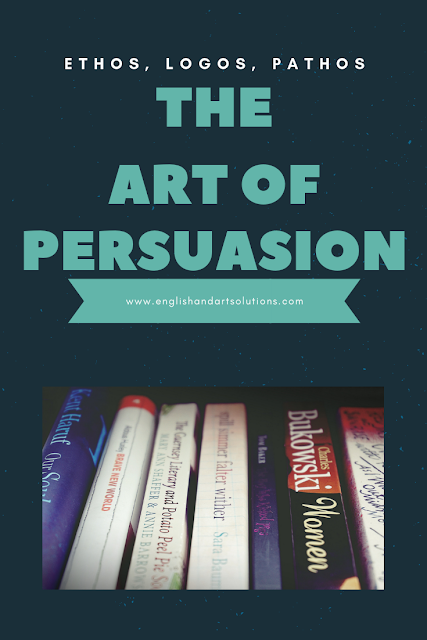 OVERVIEW:
ETHOS
- Personal character
PATHOS
-Putting the audience into a certain frame of mind.
LOGOS
-On the proof, or apparent proof, provided by the words itself.

ETHOS
The mode of persuasion “Ethos” deals with the character of the speaker.

This is the verbal equivalent of all those degrees hanging up in your doctor’s office. And once you’ve established why you are an authority on the subject, you need to build rapport.

This appeal is perhaps the most difficult to establish; you have to prove yourself by demonstrating that you understand what you are arguing because:
you are providing…
-personal experience or
-know someone else who has personal experience

you are using expert support…
-through extensive research,
-through up-to-date research
-through recognized authorities in the field

you are using appropriate writing style…
-by means of professional and strong words that carry appropriate connotations; be sure that you don't sound overly emotional,
-by using mostly 3rd person. Only use 1st person when providing a specific personal experience.

you are treating your audience with respect by…
-establishing some common ground in a refutation section. Find some mutual ground for both sides of the argument by acknowledging that your opinion and the opinion of the opposite side agree on at least one aspect.

PATHOS
This is the emotional appeal which purports to persuade an audience by appealing to their emotions.

Authors use pathos to invoke sympathy from an audience; to make the audience feel what the author wants them to feel.

The BEST way to incorporate pathos (or emotional) appeals is by using words that carry appropriate connotations.

Denotation refers to the dictionary definition of a word. Connotation on the other hand refers to words that carry secondary meanings, undertones, and implications.

Pathos accesses the emotions and deeply held beliefs of the audience. It often makes audiences feel like they have a personal stake in the information being provided and is often the catalyst that drives them into action.

LOGOS
Logos uses logic, reasoning, evidence, and facts to support an argument. Logos appeals to the more rational side of the audience’s minds, and provides support for the subject matter.

Logos strategies can often be used to strengthen the impact pathos has on the audience.

“If ethos is the ground on which your argument stands, logos is what drives it forward: it is the stuff of your arguments, the way one point proceeds to another, as if to show that the conclusion to which you are aiming is not only the right one, but so necessary and reasonable as to be more or less the only one.”

Aristotle found that the most effective use of logos is to encourage your audience to reach the conclusion to your argument on their own, just moments before your big reveal. They will relish in the fact that they were clever enough to figure it out, and the reveal will be that much more satisfying.

Another logos trick used often is the much abused syllogism.

The syllogism is a way of combining two premises and drawing a fresh conclusion that follows logically from them. The classic instance you always hear quoted is the following:
All men are mortal. Socrates is a man. Therefore, Socrates is mortal.

While you need to take care with the syllogisms you use — false syllogisms can lead to obvious logical fallacies — they can be a powerful tool for helping your audience draw certain conclusions.

•       To use logos would be to cite facts and statistics, historical and literal analogies, and citing certain authorities on a subject. Logos is the Greek word for “word,” however the true definition goes beyond that, and can be most closely described as “the word or that by which the inward thought is expressed, Lat. oratio; and, the inward thought itself, Lat. Ratio. (1) The word “logic” is derived from logos.”
Posted by Nina Nichols on July 01, 2018

Email ThisBlogThis!Share to TwitterShare to FacebookShare to Pinterest
Labels: Reading and Literature